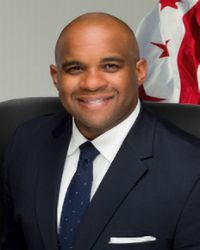 Willie L. Phillips was appointed to the Public Service Commission of the District of Columbia (PSC) by Mayor Vincent Gray in 2014 and reappointed by Mayor Bowser to serve as Chairman in 2018.

Chairman Phillips is an experienced regulatory attorney combining over a decade of legal expertise in private practice and as in-house counsel. He has an extensive background in the areas of public utility regulation, bulk power system reliability, and corporate governance. Chairman Phillips has represented the District of Columbia in national and international energy policy discussions, including dialogues at the Federal Energy Regulatory Commission (FERC), U.S. Congress, and U.S. Department of State. He has also led efforts to influence PSC communications and to update public-facing platforms.

Prior to coming to the PSC, Chairman Phillips served as Assistant General Counsel for the North American Electric Reliability Corporation (NERC), a not-for-profit international regulatory authority, in Washington, D.C.; he also worked for a Washington, D.C. law firm, Van Ness Feldman LLP, where he advised clients on regulatory compliance and policy matters and assisted on litigation and administrative proceedings on the Federal and State level.

Chairman Phillips is an active member of the National Association of Regulatory Utility Commissioners (NARUC) where he currently serves on the NARUC Board of Directors, as Vice Chair of the Select Committee on Regulatory and Industry Diversity. He is also President of the Mid-Atlantic Conference of Regulatory Utility Commissioners (MACRUC), a member of the Executive Committee for the Advisory Council to the Electric Power Research Institute (EPRI), Keystone Policy Center Energy Board, Energy Bar Association, Dentons Smart Cities & Communities Think Tank, the American Association of Blacks in Energy, and the Center for Public Utilities Advisory Council. Chairman Phillips also serves on the Board of Directors of the Organization of PJM States, Inc. (OPSI) and is Chair of the Living Classrooms Foundation of the National Capital Region.

Chairman Phillips has a Juris Doctor from Howard University School of Law and a Bachelor of Science from the University of Montevallo. He is also a member of the District of Columbia Bar and Alabama State Bar Association.