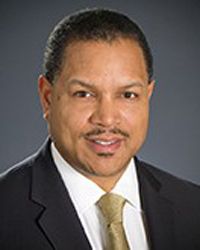 Timothy Alan Simon, Commissioner Emeritus, (Simon) was appointed to the California Public Utilities Commission by Governor Arnold Schwarzenegger on February 15, 2007 ending his term on December 31, 2012. Prior to this appointment he served as Appointments Secretary in the Office of the Governor, the first African American in California history to hold this post.  He served as the Chairman of the National Association of securities Regulators Gas Committee and Vice Chairman of the Utility Marketplace Sub-Committee. Simon also serves as Adjunct Professor of Law at Golden Gate University School of Law of law where he teaches Securities Regulations and serves as Advisor in the School of U.S. Legal Studies on International Securities Regulations.securities and banking industry attorney involved in financial products and services, he firmly supported investment in California’s utility infrastructure as critical to California’s economic future, and encourages a balanced public policy in utility regulation.  He actively promoted and encourages diversity in utility procurement, educational opportunities, and in workforce development. In 2013 Simon created TAS Strategies and serves as an attorney and consultant on energy, utility , infrastruture and broadband projects.

On the national level, Simon served as Chair of the National Association of Regulatory Utility Commissioners (NARUC) Committee on Gas, Chair of the Liquefied Natural Gas Partnership between the Department of Energy and NARUC, member of the Gas Pipeline Safety Taskforce with the U.S. Department of Transportation , member the NARUC Board of Directorsand also served on the Critical Infrastructure and Consumer Affairs Committees, the NARUC Wireless Task Force, and Vice Chair of the Utility Market Access Subcommittee. In his role as NARUC Gas Committee Chair, Simon was is member of the National Petroleum Council, an oil and gas advisory committee to the Secretary of the Department of Energy (DOE) and of the North American Energy Standards Board (NAESB) Committee on Gas and Electric Harmonization.  Simon serves as a member of First Friday Caucus, a national educational group on restructured competitive utility markets, the Advisory Committee of the Annual Baseline Assessment of Choice in Canada and the United States (ABACCUS) report and the Advisory Council of the North American Energy Standards Board

At the state level, Simon served as a member of the Califonia Green Jobs Council and the Advisory Board of the Berkeley Energy & Resources Collaborative at U.C. Berkeley.

Simon has published articles for the National Regulatory Research Institute “The Role of Natural Gas in California’s Climate Policy” and the Green California Community Colleges Summit – “A Discussion on Innovations in Technology Policy and Practice”.

Under Simon’s leadership, the New Connections collaborative was established in 2007 to increase utilities’ Women- Minority- Disabled Veterans- Business Enterprises procurement for legal, financial, and clean technology services. Subsequently, New Connections was propelled to national prominence through the establishment in 2009 of NARUC Subcommittee on Utility Marketplace Access.

Simon received a Bachelor’s degree in Economics from the University of San Francisco, and a Juris Doctor from the University of California Hastings College of the Law.  He currently is an adjunct professor of Securities Regulation and Merger Acquisitions at Golden Gate University School of Law in San Francisco, and acts as an advisor on international securities in the U.S. Legal Studies Program. Simon is an active member of the State Bar of California.